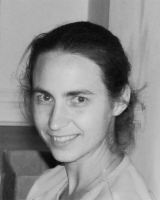 Dr. Ali Mazalek has spent nearly 20 years trying to get digital technologies to fit better into her physical world and life, rather than letting them drag her into the pixelated depths of her computer screens. At the same time, she has a deep interest in how computational media can support and enhance creative practices and processes, supporting new forms of expression and new ways of thinking and learning. She is a Canada Research Chair in Digital Media and Innovation and Associate Professor in the RTA School of Media at Ryerson University. Her Synaesthetic Media Lab (synlab.ca) is a playground where physical materials, analog sensors, and digital media happily co-exist and come together in novel ways to support creativity and expression across both science and art disciplines. Mazalek received M.S. and Ph.D. degrees from the MIT Media Lab and a Hon. B.Sc. in computer science and mathematics from the University of Toronto. She is a member of the inaugural cohort of the Royal Society of Canada's College of New Scholars, Artists and Scientists.

We are increasingly tethered to pixelated boxes of varying shapes and sizes. These devices are ever present in our lives, transporting us daily into vast information and computational realms. And while our interactions with digital devices are arguably becoming more fluid and “natural”, they still make only limited use of our motor system and largely isolate us from our immediate physical surroundings. Yet a gradual shift in the cognitive sciences toward embodied paradigms of human cognition can inspire us to think about why and how computational media should engage our bodies and minds together. What is the role of physical movements and materials in the way we engage with and construct knowledge in the world? This talk will provide some perspectives on this question, highlighting research from the Synaesthetic Media Lab that supports creativity, discovery and learning across the physical and digital worlds. 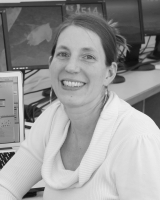 Camille Utterback is an internationally acclaimed artist and pioneer in the field of digital and interactive art. Her work ranges from interactive gallery installations, to intimate reactive sculptures, to architectural scale site-specific works. Utterback’s work explores the aesthetic and experiential possibilities of linking computational systems to human movement and physicality in visually layered ways.

Utterback holds a BA in Art from Williams College, a Masters degree from the Interactive Telecommunications Program at NYU’s Tisch School of the Arts, and is currently an Assistant Professor in the Art and Art History Department at Stanford University. Utterback is represented by Haines Gallery in San Francisco.

In her talk, Utterback will use examples of her own ground-breaking computer vision based artwork along with other art historical and contemporary examples to explore interaction design from a creative and sometimes radical perspective. While we often think our current technological innovations are completely new, a deeper look to the past provides intriguing visions, alternate possibilities, and provocations for the present. For example, many artists in the 1960’s created projections onto multiple layers of glass or other transparent surfaces, including moving and sculptural surfaces. A closer look at these works reveals new possibilities for current work, which may also now be more feasible due to technological progress. Along with introducing inspiring examples from the past, Utterback will outline her current research into transparent, shaped and moving surfaces for interactive projections. Her current projects include multi-sided interactive installations using sets of scrims, fabric, LCD and OLED surfaces, and projections into custom formed glass – both multi-layered glass surfaces, and hand blown or cast glass. At Stanford, Utterback recently taught two quarters of a course titled “Sculptural Screens” and will also share some of her students’ innovative projects. An important element of Utterback’s artistic research is questioning how technology can be designed to either ignore or enhance our embodied selves. She will highlight this aspect of her work along with lessons she has learned in her near 20 years working as a professional artist at the intersection of art and technology.